So I leave town for a few days and I come back to see the web flooded with nothing but negativity for the Inhumans. Well, I happened to see it night one, and I, as a matter of fact, loved it! It wasn’t perfect, but it was definitely better than some of the really negative reviews out there would have you believe. So, here’s my honest to goodness review of Marvel’s Inhumans, as a true, through and through Marvel fan.

First off, I want to address the problem most people are having with the show being, well, a show instead of a movie. Get over it. Number one, making it a show gives us more time to focus on all of the characters, and there are 8 of them (yes, including Lockjaw). You can’t give 8 characters meaningful arcs in a 2 hour movie. Iron Man is about Iron Man, one character, easy. Inhumans is about a family. That’s a bit more complex. And secondly, they put the first two episodes out in theaters, so you still get your movie! So what are you complaining about??? 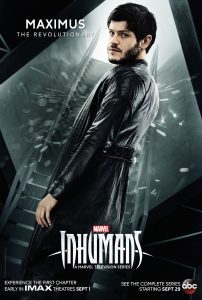 So now let’s get into the actual show. The plot is exactly what we’d expect from an Inhumans story: Maximus initiates a coup to take over the throne of Attilan. It appears as if he’d been planning this for a while, considering his goons were already referring to him as king and Auron was on board. The spark to start the fire, it seems, came from the boy, Bronaja, who got Ulysses-like powers to see visions of the future. I’m surprised they didn’t just make him Ulysses, actually, that would have been cool. After telling Maximus he’d be attacked by snakes, and it actually coming to pass in the form of Medusa, he’s kind of pushed over the edge.

With Triton supposedly dead, Gorgon going to look for him, and Black Bolt locked away thinking, Maximus seized the opportunity to take over Attilan. Crystal’s first instinct upon hearing the news was to protect her family, having Lockjaw take them all far away from the danger, to Earth. Thus began the Inhumans’ fight to survive in a world that’s foreign to them.

So let me list everything they did right, since no reviewer out there seems to want to do that. First off, they nailed the Inhumans character wise. Watching this show felt like reading an Inhumans comic. Maximus’s jealousy of his brother, resentment for being human, and desire for the throne; Gorgon being the strong dumb guy, and Karnak the tactical pessimist, all on point. Medusa translating for Black Bolt was the best, by establishing that she’s the only one who knows what he’s trying to say, they really solidify the relationship between the two. I nearly shed a tear at that heartwarming moment on Earth, when Medusa asked Black Bolt to let her know he’s alive and he placed the communicator to his heart. Some people questioned why these communicators would be vocal since Black Bolt can’t speak, which I admit is a pretty noticeable oversight. Maybe they were designed before he was king? And he always has Medusa by his side, so that probably was just never a bridge they had to cross. 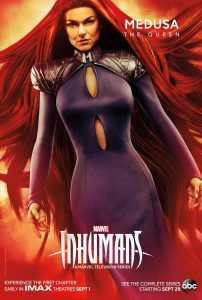 Next is the display of powers. I don’t know why people were whining about the CG on Medusa’s hair, it looked fine, and it looked even better in action. It was made more than evident that Medusa’s strength and confidence is derived from the power her hair gives her. Which explains why she was so shattered when Maximus cut it. This makes her fight with Auron such a strong character moment. Her line “I am the Queen of Attilan. No one tells me what to do.” shows us that Medusa has come to terms with her new haircut, and is ready to fight back, with or without the hair. I will admit, being that Medusa is my favorite Inhuman, it was sad to see the hair go so soon. But I like Medusa because she’s ruthless, and just as strong a leader as, if not more so than Black Bolt.

Back to the topic of powers, Gorgon was shown to be the powerhouse, and undoubtedly so. One stomp caused some pretty massive damage, and he’s clearly no stranger to combat, considering he called Maximus out. I will say I’m not too optimistic about a bunch of Hawaiian surfer bros taking on an Inhuman army to defend their beach. You know, because the Inhumans have powers, and they have surfboards, but hey, that’s their decision. Karnak’s powers were probably the best part of the show. The way he literally mapped out a scenario in his head that ended with his death, then went back and redid it, emerging victorious that time was pretty cool. It’s a shame he hit his head and now his powers are on the fritz, but let’s hope he can fix that in time to kick more butt. I will say this though: Guy whose power is finding the weak point in everything grabs onto the weakest point of a mountain he’s descending… Yeah, didn’t plot out that scenario, did ya buddy?

Crystal didn’t have a lot to do, but the way she exploded Auron’s food tray demonstrated just a taste of her power. Crystal is probably the most powerful of all the Inhumans, barring Black Bolt, since she can control the elements. But her youth and naivety will probably prevent her from reaching maximum power until a moment of extreme pressure. I like that Crystal is so sweet and innocent, she’s not a warrior, and she just wants to keep her family safe. But all of her decisions result in not so optimal outcomes, because she’s childish, and doesn’t fully comprehend situations. All she wants to do is play with Lockjaw, and can we really fault her for that? Lockjaw, by the way, was great. Animation was on point and he was utilized just enough to be satisfying. I also think the teleporting effect is very cool, how he sort of disintegrates and reforms. Very cool indeed. 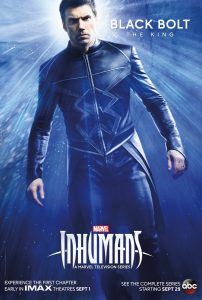 Overall, story, characters, and powers, were all great. I have a few gripes, however, as I mentioned earlier, it’s not perfect, but what is? First off, I want to see more Triton! We didn’t even get to really see what he can do, and he got written off so quick. I want him back! Another thing is that they kind of skimped on the action. This is very much a character story, and I do appreciate that, but I do feel the IMAX event should have had a bit more hands being thrown. Black Bolt got a good fight scene, until he was introduced to a taser, and I did like the fight with Medusa and Auron. Other than that, the only problem I have is that I want more! The Inhumans were left broken, vulnerable, in a world they don’t know, and Maximus has taken over the throne, holding Crystal and Lockjaw hostage. This seems like it’s going to be a really fun story, and I for one can’t wait to see the rest.

So that’s an honest review, from a fan of these characters, and not some random know-nothing reviewer that’s probably never picked up a comic a day in his life, or someone that’s salty because Inhumans are ‘replacing’ X-Men or whatever. So what did you guys think about Inhumans? Comment down below, and stick to Face Front for all your Marvel news!