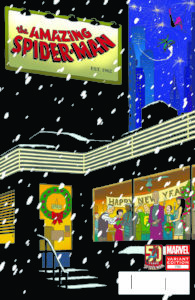 This cover is a variant of The Amazing Spider-Man #700, and one of my favorite comic book covers of all time. The artist is Marcos Martin, and he does an astounding job capturing the core of Spider-Man in one single picture. Here we see the likes of J. Jonah Jameson, Robbie, Betty, Flash, and Harry all enjoying a New Year’s party. But, Mary Jane is worried about Aunt May, who seems to have one question on her mind: Where is Peter?

No doubt Mary Jane is wondering the same thing, and of course we know the answer. He’s up in the sky, battling for the fate of the city against the Green Goblin. I can’t express how in love I am with this cover. You can literally imagine an entire story around one scene. Peter promises his friends he’s going to make it in time for New Year, but the Green Goblin enacts a scheme that will destroy the city at midnight. While all his friends are yelling Happy New Year, Peter just barely puts an end to Goblin’s treachery, and causes an even greater rift between himself and the people he loves.

This cover speaks the timeless words “With great power, comes great responsibility”. It takes us back to the simple, 60’s days of Spider-Man, where he’s constantly losing valuable time with his friends and families because of the obligation he has to protect the city. A cover, I think, was especially needed for this issue, because it’s the one where Doc Ock kills and takes Spider-Man’s place for the next year, changing everything. It’s also an added bonus that issue #700 was the last of 2012, leading into the new year and ending Spider-Man’s 50th anniversary. That honestly made me a little mad when I read it way back when, because this monumental year for Spider-Man was ending on such a sour note, but this cover art is one saving grace that, I feel, capped the year of Spidey with a Thwip!

Thanks for reading True Believers, and stay tuned to the Face Front Blog for more Cover Stories!