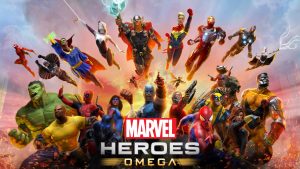 WARNING: This post contains ‘gamer lingo’, words like XP and gear and beta. If you are not fluent, you may get a little lost. Don’t worry, I’ll try and keep it simple.

So, I played Marvel Heroes Omega today. Actually, I started playing Marvel Heroes back in 2013 in the PC beta, but yesterday was the official console launch. They’ve been in beta on consoles for about a month (which I also played), but now that they’ve fully launched, I’m going to assume that this is the most perfect version of the game they were after for this date. So, with that in mind, I’m going to talk about it!

So I played around with Spider-Man, who I bought the character pack for in the beta. He’s my favorite hero and, after 4 years of playing him in the PC version, I have a pretty good idea of what he can do. I was playing on PS4 with my brother playing as Black Widow. He’s a DC fan, and literally doesn’t like any Marvel hero except for Widow, so that’s fine. I am a big fan of the couch co-op they added, which for obvious reasons couldn’t be done on PC. It’s like when we played Ultimate Alliance back in the day, and it’s way more fun to run around these levels with a friend than it is doing it by your lonesome. We played through the Hell’s Kitchen level, where you’ve got to fight Venom, Electro, Shocker, and Doc Ock, in an attempt to secure the Tablet of Life and Time.

I’ve been through this mission quite a few times, having been on the game for so long. But I must say, they’ve definitely changed the level up. It’s a bit more streamlined for consoles. For instance, Electro would show up at random times and places in the PC version, and you and a group of other players would have to box him in and beat him. Now, he’s got his own little power plant, and his goons! They also changed the Venom fight, not drastically, but, well, Alistair Smythe used to be in the level and now he’s not… The Shocker and Doc Ock fights are basically the same. 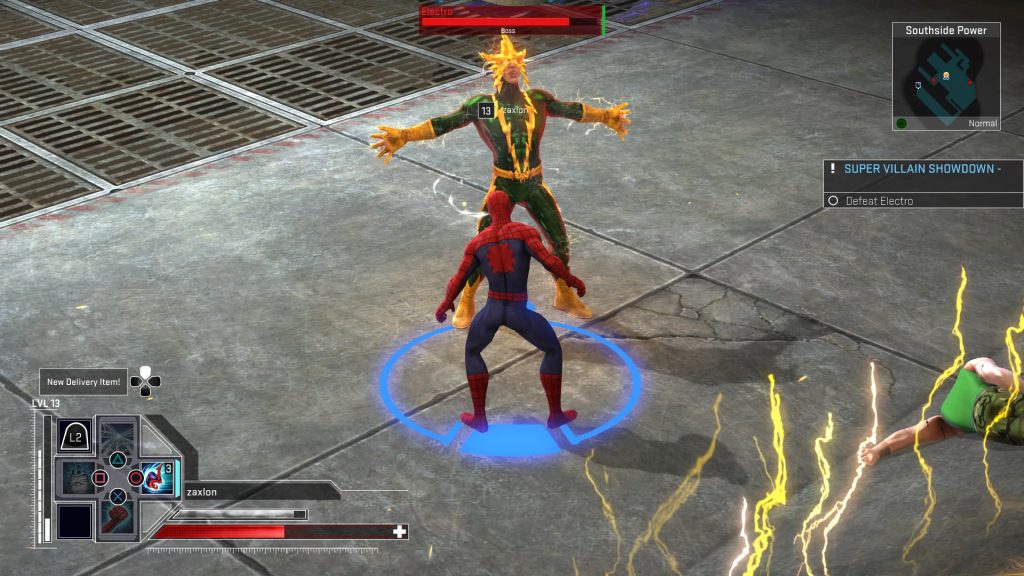 I like the gameplay and controls. You can assign which attacks you want to which slots, which makes it nice and easy. I like playing consoles better than PC, I grew up on PlayStation, and a good Duelshock feels right in my hands. In the PC the moves were attached to A, S, D, F, G and H on the keyboard. But using the good old X, square, circle and triangle just feels so much better, and you can access a secondary set of moves by holding L2. 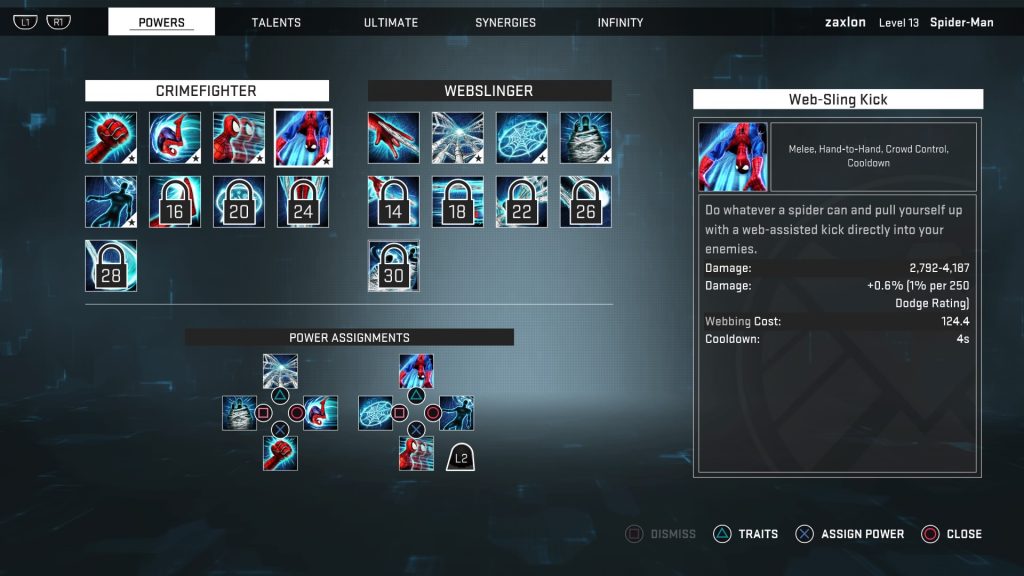 Like the PC version, this one has gear. I feel like the inventory is a lot smaller, which is burdensome when you try to pick up a mask or web shooters and Spider-Man complains “I only have two arms here… usually!” But I overcame inventory in the PC, so I think I can do it here. The system is also simplified, with big green arrows on each piece of gear telling you “Oh, this will make you stronger!” and big red ones saying “Nah fam, trade this in for crafter XP.” 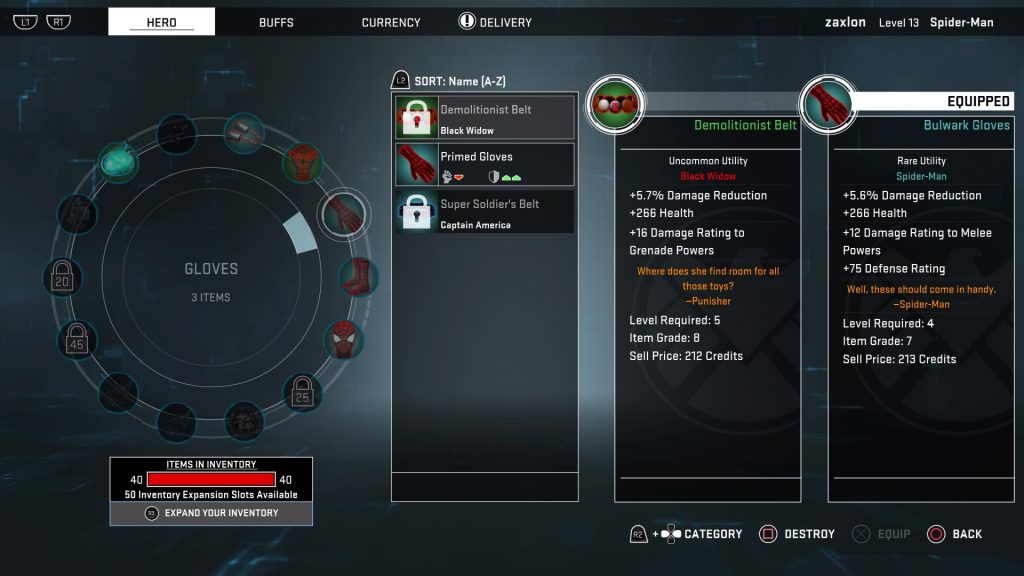 Speaking of XP, more powers unlock as you get higher in level, which would be a problem for my brother, because Black Widow caps at level 10 unless I fully unlock her which would allow her to go to 60. Luckily we finished the level as he hit level 9. But it’s a little jarring, since My Spider-Man on the PC is not only level 60, but has prestige as well, so not having access to all his powers makes me a little impatient. I had to hit level 10 just to web swing!

Now, there are some things I take issue with. For instance, everything is so much more expensive! Like, leaps and bounds. Things you didn’t have to buy, with real or in-game currency, in the PC version are being sold here! Also, the character selection is drastically decreased, as are the costumes, and the sidekicks are absent. But I feel all that will come in time, so I’ll be patient. Except for the Fantastic Four, who have been removed from both versions of the game, but that’s a post for another day. Now this next issue made me very upset. I saw a Spider-Man loot box, with a chance at the Spider-Man Homecoming costume, the hooded version, Spider-Gwen, Amazing Spider-Man, or Iron Man’s Mark 47. Each cost 250 G’s (currency that can only be acquired with real money). I had 500 from the Spider-Man character pack I bought, so I said hey, why not, any of those costumes would be sweet, and I get two chances! What the loot box failed to mention, however, was that I also had a chance to get NO COSTUME AT ALL! Which was the case with both boxes I opened, so now I have zero G’s, no new Spider-Man costumes, and a bunch of useless junk I’m probably going to trade or dismantle later. Stupid me, I guess. Costumes in the PC version have always been for sale, which is why I like Marvel Heroes. No BS ‘chance’ crap like in pretty much every Marvel mobile game, you get what you pay for. But I actually discovered that this is the only way to get the Homecoming stuff, even in the PC version, a chance draw through Fortune Cards, which makes me very sad after how long I’ve been supporting this game. 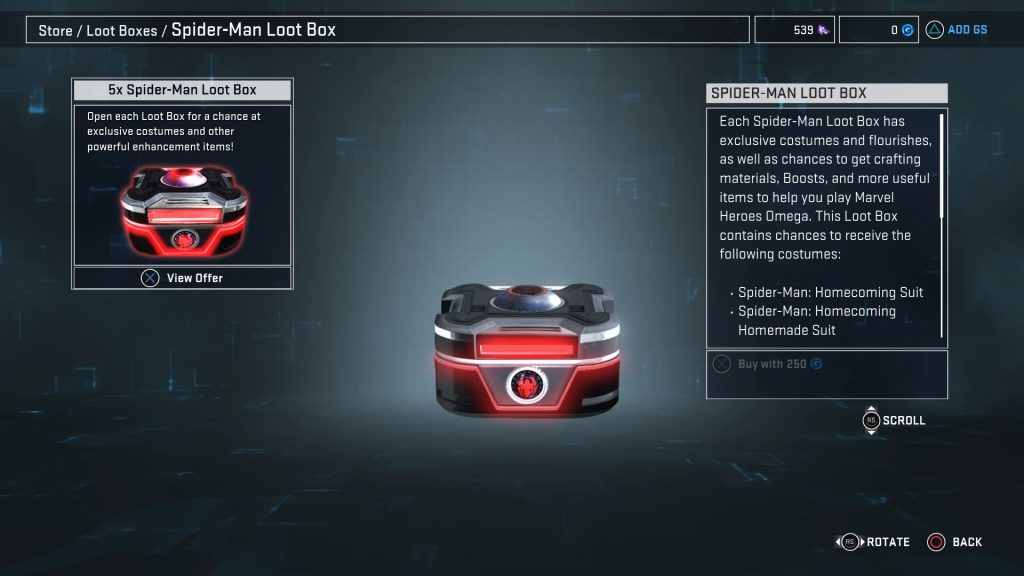 So, never buying loot boxes again. But other than that, all I’ve ever wanted, since I played the PC beta back in 2013, was for Marvel Heroes to come to PlayStation, and now I finally have that. It’s a great start, and there is room for improvement, but so far, I think that newcomers will be able to jump right in and have a good time. PC players can stick with that, heck, I have more characters and costumes in the PC version, so I’ll still play that too. But playing on the PS4, well, that’s just a dream, that’s finally come true.