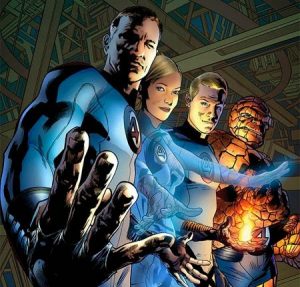 Let’s begin by watching the video below:

I watch this and I shed a tear. There they are. The Fantastic 4 at their best. Johnny showboating and acting a fool, Reed analyzing the situation, Ben itching to fight and Sue keeping the team together with her levelheadedness. Zooming around the city in the Fantasticar and chasing down their greatest nemesis, Dr. Doom.  So what happened? Why has Marvel’s first family of super heroes been pushed into myth and legend?

I believe (in my own conspiracy theory sort of way) that the big Secret Wars event Marvel had back in 2015 existed for three reasons:

At its heart, Secret Wars was about Mr. Fantastic’s final battle with Dr. Doom. Doom, who made Johnny into the sun, Sue his wife and turned poor Ben into a wall, as a means to finally conquer his greatest foes. I believe that Marvel was giving the Fantastic 4 their last hurrah, a farewell in the form of a cataclysmic, universe-changing, 9-issue event. In the end, Doom admitted (verbally, and very reluctantly) that Reed Richards was indeed smarter than him, and Reed fixed Doom’s disfigured face. Now Reed and Sue are off remaking the universe with their kids, Ben’s in Guardians of the Galaxy, Johnny is with the Inhumans, Doom is Iron Man and the Baxter Building is Parker Industries’ main base of operations. Seems like a queue for a ‘The End’ title card if I’ve ever seen one. 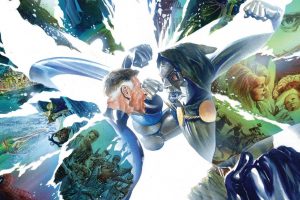 I don’t know about you, but considering everything, to me this is just sad. The Fantastic 4 were more or less Marvel’s first comic book (Cap and Submariner aside), and they ushered in many of Marvel’s greatest characters and stories: Black Panther, Inhumans, Galactus, Silver Surfer, Skrulls, and more! Spider-Man, Marvel’s most popular hero, had the FF on the front cover of his first issue (Not Amazing Fantasy #15, but the actual Amazing Spider-Man #1)! The Fantastic 4 have a long, rich comic book history, and now it’s as if none of it ever existed.

Now, you all know as well as I do that 20th Century Fox has the rights to produce Fantastic 4 movies, not Marvel Studios. You all also know as well as I do that this is the most probable reason that the FF are getting the shaft. Just to be clear, I’m not here to point fingers or name names. It makes sense that Marvel is focusing all of the toys and games and theme park rides on the Avengers and other MCU heroes raking in millions of dollars for the company in merchandising. That’s not a problem. What is a problem is the fact that if Marvel were a search engine, and you typed in ‘Fantastic 4’, it would bring up a screen saying ‘No results found’ and ‘Did you mean The Avengers?’

Let’s go over an example from the game I got the video from, Marvel Heroes (great game by the way). I’ve been playing since the beta in 2013, so it’s pretty easy for me to recognize when they make changes to the game. Luckily, this game was launched before the cleansing of the FF began, so they all made it into the game as playable characters. But as time goes on, I can see the where they have made active efforts to remove the Fantastic 4. For instance, later in the game you get to the Helicarrier, where Nick Fury discovers that Doctor Doom is behind everything, and he tells you to go talk to Sue Storm about Latveria. Once you do, she gives you a nice little history lesson on the Fantastic 4 and their run ins with Doom in the past. Now when you approach Nick Fury at this point in the game, he tells you to go talk to Silver Sable. And she give you no relevant information on Latveria. And where Reed Richards stood ready to craft materials for you is now Hank Pym. And I have now recently discovered that, unless you previously owned them, the Fantastic 4 are no longer able to acquire as playable characters. Like, what? Why would they go and do that? That’s not leaving the FF out, that is full on removing and replacing them.

Look as hard as you wish, you won’t find the Fantastic 4 anywhere. Their comic book is cancelled, so unless it’s in the pages of another hero’s book, they won’t be found in the comics. Where are they in games like Future Fight and Contest of Champions? Absent, and I’ll bet a million to one they don’t show up in Lego Marvel 2 or MvC Infinite either. The Marvel animation? I saw the Thing in one episode each of Avengers Assemble and Ultimate Spider-Man, and all four of them in the opening sequence of one episode of Hulk and the Agents of S.M.A.S.H. Mind you, this is out of 4 seasons of Spider-Man, 3 seasons of Avengers, 2 seasons of Hulk, and 2 seasons of Guardians of the Galaxy. Early on in these shows, auxiliary FF characters such as Dr. Doom and Galactus would show up a little more often, but definitely not anymore. How about toys? Not one iota. Now recently enough, Hasbro’s Marvel Legends line just put out a Sue Storm figure with H.E.R.B.I.E included and rumors of a Human Torch on the way. And on the topic of progress,  there is a Thing and Human Torch comic coming up with Marvel Legacy, which I think is great, but is it a sign of tides turning? While I always remain hopeful, it’s hard to be optimistic. 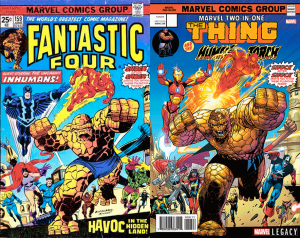 But through all this, there’s one thing that’s got me confused: The X-Men are making a comeback. They’ve got about 50 new comic series on the shelves, Marvel Legends left and right (found 90’s Cyclops at Comic Con, he’s the best!), and they just showed up in Future Fight while they’ve been in Contest of Champions and Marvel Heroes from the start. And while absent from animation, they’ve got Legion and The Gifted on the live action side of television. Not long ago, the X-Men were in the same sinking ship as the Fantastic 4, but I guess Bobby froze the water and they ice skated to safety. What’s the difference? Why do the X-Men get to come back but the Fantastic 4 are still lost in the Negative Zone of Marvel marketing?

I realize not many people liked the first two Fantastic 4 movies (I did, but hey, that’s me). I also realize that pretty much no one liked the reboot (I didn’t either, but hey, that’s me… and everyone else). I would like to think I speak for all of us when I say we want them in the MCU. (Wanna hear my premise for an MCU Fantastic 4 movie? No? Okay…) But with 20th Century Fox somehow still thinking they can revive a franchise that they’ve dug a grave for and buried, then dug up and buried again, there’s little chance of that happening. I know they’re a movie studio, and they want to make money, but it just upsets me that no one over there cares about what they’re doing to these characters. The Fantastic 4, heroes that Marvel in days of old would display loud and proud on the front cover of every comic, now pushed into the dark recesses of the Marvel Universe.

Listen guys, I’m not gonna sugarcoat it. The Fantastic 4 are gone. For good? Who knows. But for now, most definitely. I can’t help but look up at that video, and flip through the old comics, and wonder why Marvel’s first family, the Fantastic 4, met such an unceremonious end. Mr. Fantastic, the Invisible Woman, the Thing, and the Human Torch, four real heroes that have been cast out and forgotten. I don’t want to accept it, and I’m sure you guys are holding out hope as well. But for now, and for the foreseeable future, it’s flame off for the Fantastic 4. So let us bid them farewell, and hope with all of our hearts that, one day, they make a safe journey home. 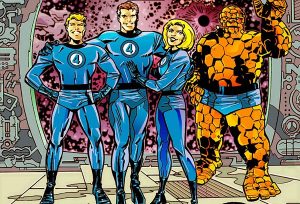 1 thought on “Fate of the Fantastic 4”