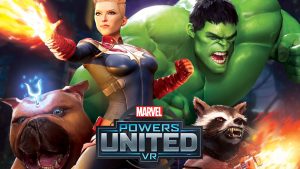 Well what a nice surprise! Bill Rosemann, the head of Marvel Games (aka a guy who has done more work in the past few months than in his entire career at Marvel) announced at D23 a new exclusive, Marvel Powers United VR! Markiplier was there and everything. This game is exclusive for the Oculus Rift+Touch (which means I should probably re-label my ‘PlayStation VR’ money jar) and, so far, features Captain Marvel (heart eyes emoji), Hulk, and Rocket Raccoon. Here’s a trailer:

I could have sworn from the colors she was wearing that girl was going to transform into Black Widow. But that aside, this looks great! And I’m not just saying that. Every time I see VR it looks choppy and awkward, but I’ve come to accept that because I honestly didn’t think it could get any better. But this looks fluid, and responsive. When ‘ol Markiplier was playing it, it really seemed like he was Hulk smashing some Kree goons.

The story apparently consists of Ronan the Accuser (hence the Kree) and the Masters of Evil (isn’t Falcon going to fight those guys in Episode 2 of Sam Says! Sorry, shameless plug, I regret nothing) getting their hands on the Tesseract and tearing apart time and space. Luckily Lockjaw is there to help them teleport around this mess!

They promised more characters and multiplayer, which we actually saw in action, so I really am looking forward to this. I normally don’t look twice at VR projects (except that Spider-Man Homecoming one), but this has my undivided attention! What about you guys? Are you gonna buy a Oculus Rift for this? Lef me know down below!