So it’s been over a week, and I’m sure that you all have had a chance to watch The Defenders by now! If you haven’t, well then, what are you doing here!? Go finish! Shoo! Shoo! But for those of you who have, I’m going to break down what are, in my opinion, wait for it… the 10 best moments in The Defenders! Yay! Alright, enough buildup, here we go! Oh, and case you haven’t realized by now, SPOILER WARNING! 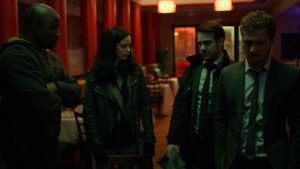 When The Avengers came out, some of the best scenes involved the interactions of characters we’d seen separately for 4 years across five different movies come together for the first time. How would Cap react to the modern age, or Iron Man to Norse Gods? What we get in the restaurant scenes of The Defenders asks and answers those same questions.

I have to say, the heroes coming together, turning the restaurant into a temporary base of operations and the conversation that followed was just what I wanted from all of these clashing personalities. The group being creeped out by Daredevil’s powers, Iron Fist’s amazement at how strong Jessica is and how he attempted to form them into a super team. My favorite moment was when Jessica called Matt out on being Daredevil, and ultimately forced him to join the group. My one concern was that Stick would ruin the scene, but luckily he only enhanced it, and provided some emotional weight for Matt. 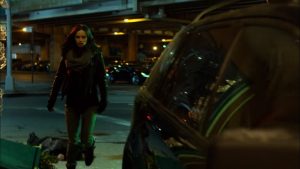 Speaking of the restaurant, my next best moment is where Alexandra corners our heroes and sics Elektra on them. And just as Elektra is about to (try to) cut them to pieces, BOOM! Jessica slides the car through the window and rejoins the group, Chinese Drive Through (that’s the name of the song in that moment, look it up) heroically blaring behind her. Jessica Jones, MVP! 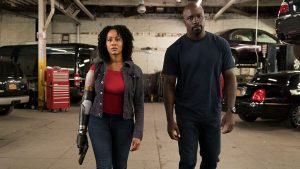 Okay, so it’s not a very happy moment, but there are certain reasons I like this. One, it leads to what we all have wanted since Misty was introduced, the bionic arm! We got a glimpse in the Season 2 photo that was put out yesterday, and man does it look great!

The next reason I love this scene is because, for seemingly the first time, Misty did something heroic. All throughout Luke Cage and even The Defenders, it’s hard to root for Misty because she’s always arresting and interrogating the heroes, who we’re supposed to be rooting for. So when she jumps in the way of Bakuto’s blade to protect Claire, for the first time I felt that Misty was a hero. 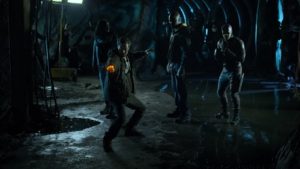 This is more like two moments in one, but when Danny unleashed the full power of the Iron Fist, it was freaking awesome! In the scene where he’s fighting the team off from taking him captive and in the mine where Luke tells him to “Light it up”. Seeing such raw power from the Iron Fist is a sight to behold, since he only had, like, one big power move in the entirety of his own show. 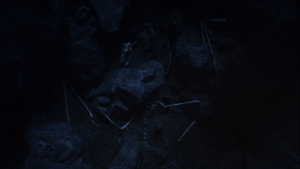 Speaking of Iron Fist, let’s talk about Shou-Lao! Or, at least it was implied that was Shou-Lao’s skeleton, I’m still unclear on that. But the moment where the camera pans out, and we see the skeleton posed in the same position as the tattoo on Danny’s chest, well, that was just so cool. And it was so mean that the Hand was taking his bones to make ‘the substance’! They should be ashamed of themselves! 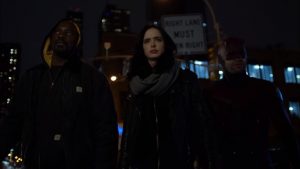 5: Defenders v.s The 3 Fingers of the Hand

So, at this point Sowande had already been decapitated and Alexandra had been impaled. Which left us with Gao, Bakuto, and Murakami. Now I already didn’t like any of these guys, which a credit to the actors, so I was waiting for them to get their butts handed to them. So when Daredevil, Luke, and Jessica meet them in that parking garage for a smack down super slam, I was very pleased. Number one, they introed like bosses, and then the actual fight was great! Daredevil throwing down with straight up ninjas, Luke and Jessica pulling combo moves on Gao, that Colleen Wing assist at the end. And it didn’t hurt that the fight was paralleled with Elektra throwing hands with Iron Fist! 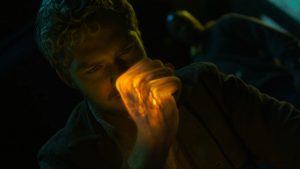 “Just remember, you started this.” What a scene. The first time we get to see the Heroes for Hire share the screen, and they throw down in a very satisfying brawl! I love how Iron Fist kept coming at Luke, who seemed to genuinely not care as he tossed poor Danny from wall to wall. I felt bad watching Danny try his hardest, whipping out all of his Kung-Fu mastery, and Luke just taking it. But when he busted out the Iron Fist, phew, you bet Luke was heated! I would have loved to see that outcome, had the cops not shown up. But nonetheless, great fight. 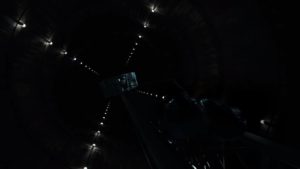 I’m a sucker for pure feats of heroism. Iron Man saving all those people from Air Force One, Spider-Man lifting a building off of himself, Nick Fury saving FitzSimmons, heck, even Flash running up into that time vortex in the end of season 1. I doubt many will disagree with me when I say that the single most heroic moment in the show was Jessica holding that elevator after the cable snapped. Full disclosure, Jessica Jones was my least favorite of the Netflix MCU shows, but this moment here was simply breathtaking! Jessica Jones MVP! Again! 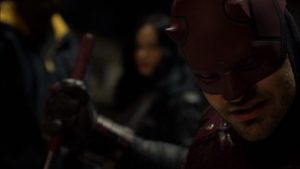 Just as I love acts of heroism, I hate it when heroes quit. They bum around the city, 90% with an unkempt goatee, while they grit their teeth and clench their fists as cop cars drive by, wishing they could do something about it, but they can’t because they’re quitters. So when Matt finally decided to be Daredevil again, I was so happy. And I’m not talking about stopping those muggers after the earthquake, I mean when Murakami was about stab the crap out of Jessica and straight up Daredevil swoops in to save the day. Trish’s astonishment at the Devil of Hell’s Kitchen personally saving her friends was priceless. And the scene where he interrogated Sowande was great, making Daredevil the right amount of tough and terrifying. Daredevil is my favorite of the Netflix MCU shows, so this was a great moment for me. 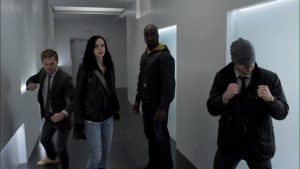 Was there any doubt this was number one? All four Defenders throwing down in a hallway, Elektra looking all scary and fighting like a boss, Luke Cage and Iron Fist teaming up. I mean, Iron Fist hiding behind Luke Cage as he took on gunfire was flat out comic book TV show goals! I’ve lost count of how many times I watched it, and as a matter of fact, I’m gonna stop talking about it and just go watch it again.

So what was your top 10? Do you agree with mine? Comment below! The Defenders was great, and I can’t wait until they return!