Comic Con hit us yesterday with a brand new trailer for Inhumans! This time we get to finally see Medusa's hair! And today we learned from Marvel Live that Auran is in the show (And apparently a danger to bus drivers everywhere!) I was wondering also why Triton was on Earth, but it looks like he's been deployed to find all the new Inhumans (or Nuhumans as it were) that sprung up as a result of Agents of S.H.I.E.L.D. and the fish oil incident. And speaking of S.H.I.E.L.D., we got a glimpse in the first trailer, but now we clearly see the alien writing that led the team to Afterlife! Maybe these are coordinates to Attilan. Either way, it's good to see that kind of consistency with these shows. One thing I'm embarrassed to admit, however, is that I didn't know Maximus was a human! I always thought his Inhuman  power was that he was really smart since he's always inventing things, but this really explains his issues. And boy does this guy have issues! Another cool thing is seeing how Karnak's power works, that blue flash when hits the weak points is a stroke of genius! Oh, and let's not forget Lockjaw! This show looks great, and the first two episodes release in IMAX September 1. 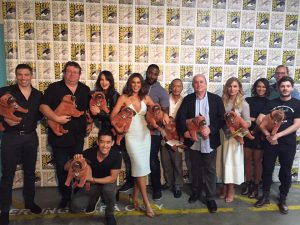