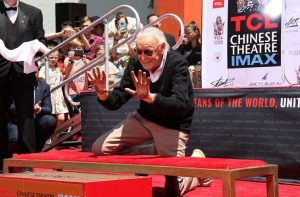 This past weekend at D23, Stan Lee was made a Disney Legend, and he got to put his hand/footprints outside of the TCL Chinese Theater. Stan, introduced with the Captain America March playing in the background, told a heartwarming story about a kid that wanted to buy a book, The Art of Walt Disney, and how he's happy to be standing in the house of Disney today. Stan was also overjoyed that his old friend Jack Kirby was inducted as a Disney Legend as well. And as if that wasn't enough, we got a new Defenders trailer yesterday narrated by Stan the Man himself! Face Front Stan Lee, here's to you!